So, on October 31st, 1517, Luther posted 95 theses on the door of Castle Church in Wittenberg, in what is now Germany. We got to see it in the clip. This moment is widely regarded as the beginning of the Protestant Reformation.

But Luther was not trying to start the Protestant Reformation. In fact, as you might guess from the portrayal by Joseph Fiennes he wasn’t really trying to upset the church hierarchy. There’s a reason that they’re known as the 95 Theses and not the 95 Complaints or the 95 Protestations. What do you use a thesis statement for? You use a thesis when you are writing a paper for school, right? Luther is a monk, he is priest, but he is also a professor. And when he posts his 95 Theses and sends courtesy copies to the bishop and archbishop, he is trying to start an academic debate.

So, what is a thesis statement? …. A thesis is a statement that you intend to argue. A thesis at the beginning of a paper is the main point of the paper, the thing that you are going to use the rest of the paper to try to prove.

Well, Luther kind of skips the arguing part and he just writes 95 different theses. He expects other scholars and clerics to make arguments for or against them. He wants to start a debate.

Several of the theses are rather technical. “12. In former days, the canonical penalties were imposed, not after, but before absolution was pronounced; and were intended to be tests of true contrition.” “20. Therefore the pope, in speaking of the plenary remission of all penalties, does not mean “all” in the strict sense, but only those imposed by himself.” Those, and many others of the theses have to do with indulgences.

Interestingly, Luther does not come out and say that indulgences are worthless, like he does in the movie. He just wants to put limits on indulgences. He thinks that other forms of repentance are to be preferred. For example, thesis 43: “Christians should be taught that one who gives to the poor, or lends to the needy, does a better action than if he purchases indulgences.” Or thesis 44: “Because, by works of love, love grows and a man becomes a better man; whereas, by indulgences, he does not become a better man, but only escapes certain penalties.” Or thesis 45: “Christians should be taught that he who sees a needy person, but passes him by although he gives money for indulgences, gains no benefit from the pope’s pardon, but only incurs the wrath of God.”

Luther also doesn’t want to the poor to be taken advantage of. Thesis 46: “Christians should be taught that, unless they have more than they need, they are bound to retain what is only necessary for the upkeep of their home, and should in no way squander it on indulgences.” Or thesis 50: “Christians should be taught that, if the pope knew the exactions of the indulgence-preachers, he would rather the church of St. Peter were reduced to ashes than be built with the skin, flesh, and bones of the sheep.”

So he writes these theses. Some are reminders of old truths. Some are counters to the practices of the day. A few are even questions.So, I want to ask you, what is your thesis for the church today? What message is it that you think the church needs to hear and debate? Maybe it’s a reminder of an ancient truth. Maybe it is pointing out the way the church’s current practices have become hurtful. Maybe it is a realignment of our priorities. What is your thesis for the church today? 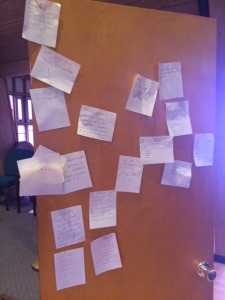