↓
Home Menu ↓
Skip to primary content
Skip to secondary content
Home - The Latest - Sermon: How Can I Understand? 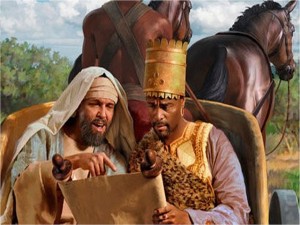 All through the seven weeks of the Easter Season we are focusing on the fifth book of the New Testament, the Acts of the Apostles, the sequel to the Gospel of Luke. We’ve heard about the early church sharing their possessions so that no one was in need. We’ve heard about the apostles Peter and John getting into trouble with the religious authorities for healing and teaching in the name of Jesus. Now we are going to jump ahead several chapters to hear the story of Philip and the Ethiopian eunuch.

Philip, a Greek-speaking Jew, had been named along with Stephen and five others as deacons of the church, in charge of distributing food and resources to the needy members of the community. But shortly after that, everything changed. The Jewish authorities lost their patience with the growing Jesus Movement. You might remember from last week that Peter and John had been imprisoned and chastised for preaching in the name of Jesus. But when Stephen the Deacon began to preach, they didn’t just chastise him, they stoned him to death. And Saul was there with the crowd who stoned him. The church that had been growing in Jerusalem was scattered. New Christians fled persecution in Jerusalem, and among the people who fled was our hero, Philip the Deacon.

After a time evangelizing in Samaria, Philip finds himself in the story we read this morning. He hears a message from the Holy Spirit, telling him to go down to the desert road that leads from Jerusalem to Gaza. And when he is there, he sees a very unusual sight:

Philip sees a man, traveling in a grand chariot, reading a scroll. Like nearly all readers in the ancient world, he was reading out loud. Philip could hear that he was reading from the Greek translation of the Prophet Isaiah. The narrator tells us that the man was from Ethiopia, that he was the queen’s chancellor, that he was returning home after worshipping at the temple in Jerusalem, and that he was a eunuch.

Let’s just take a moment to acknowledge how weird that is. Ethiopia was well outside the sphere a Roman influence. It was not unknown to Jews and Romans, but it was far off and exotic. He likely would have stood out simply on account of his dark skin color.

Second, we are told he is a eunuch. Jews were especially repelled by something they considered genital mutilation. Castration was not normally practiced in the Roman world, either. Again, it sets this man off as been foreign and exotic. He would have been considered neither male nor female, but a third and different gender.

The fact that he was a eunuch tells us that he was most likely a slave. We tend to associate slavery were backbreaking work in fields. But even in the practice of American slavery, there were slaves who served in the house in some kind of specialized service. In the ancient world, slaves were used for all kinds of specialized purposes: as tutors, scholars, managers, actors. Some slaves wielded a tremendous amount of power. That is the case with this Ethiopian man. He is one of the queen’s chief officers, in charge of overseeing the finances of her kingdom and able to represent the queen of Ethiopia on a mission to a foreign nation. Slaves were sometimes made eunuchs so that they would have no family to divide their loyalty or so that they could be trusted to work in the presence of women. This particular slave can also read Greek, which was not the native language of Ethiopia. Significant investment must have been made in his education. He is highly placed, highly educated, and highly powerful.

But one of the stranger things about the appearance of this man in the story is that he is returning from worshipping in the temple in Jerusalem. Why is this foreigner worshipping at the Jewish temple? Is he a convert to Judaism, what we would call a proselyte? Would he even be allowed to convert since he is a eunuch? Or is he what we would a God-fearer, a gentile who follows the ways of the Jewish God, worships in or supports a synagogue, but does not take the final step of converting to Judaism? Or is it possibly that he visits Jerusalem on a diplomatic or economic mission, and while he is there he visits the temple out of curiosity? The Jerusalem temple was known at the time for being an impressive sight to behold. And there would be nothing keeping a pagan from visiting in the court of the Gentiles or even from making a sacrifice to the Jewish God. The temple regularly made sacrifices to God on behalf of the Roman Emperor, for example.

The truth is, we don’t quite know. What we do know is that this character is supposed to strike us a very strange, very out of the ordinary. He comes from what might as well be the ends of the earth, he is very powerful, and yet a slave, everything about him testifies to his exotic character, and yet here he is reading a Greek translation of the Book of Isaiah, which he may have picked up during his trip to Jerusalem.

Now, at first this might sound like it speaks against Protestant theology. Martin Luther, John Wesley, and many others insisted that the scriptures should be made available directly to the common people. They did not need a priest as an intermediary between them and the scriptures. Is this passage suggesting the opposite, that the Ethiopian chancellor cannot understand the scriptures without the help of a specialist, a deacon, who has been taught how to understand them?

What we see in this passage is that scripture is always in need of interpretation. It is not enough just to read it. It is not enough just to study it, either. It must be reinterpreted over and over for the present time. If we just read it as a history text, then it is dead, unable to speak to us today. In order for the Bible to be alive today, we have to listen for what the Holy Spirit is saying through it in our own time and place.

Reading more deeply into the Bible starts with asking questions. That’s what the Ethiopian eunuch does. He reads the passage, and then he asks, “Tell me, about whom does the prophet say this? Is he talking about himself or someone else?” He asks questions. He interrogates the text. He considers that there might be more than one possible meaning to this text.

And that is important to remember. Too often when we read the Bible we don’t have enough courage to ask it questions. We assume that it says one thing and one thing only, and we assume that it is somehow irreverent to point out the strangeness in the story or wonder about the things that don’t make sense. But asking questions of the text is essential. Asking questions means that we are taking the text seriously, that we don’t just assume that whatever some Sunday school teacher or pastor told us about it is everything that could ever be known. Asking questions means that we are taking the text seriously enough to pay close attention to it, in all of its weirdness. If you’ve been listening to me for long, you know that I love to get in there and explore the weirdness in the text.

But I also want you to notice how Philip responds. He doesn’t do what I do. He doesn’t say, “Well, what you need to know about Isaiah is that it was written in the time of the Babylonian Captivity…” He doesn’t do that. I have a tendency to get stuck in that part of the interpretation, digging into the text and its background. And then I end up missing the more important step of listening for what the text has to say today.

Philip does not feel confined by what the biblical text has meant in the past. He does not give the standard interpretation. He reinterprets the text for his time, he listens to what it has to say in the context of Jesus’s life, death, and resurrection, for what it has to say to his people in his time.

And we should not be afraid to listen for the continuing revelation of the Holy Spirit as we read the Bible today. If the Word of God is alive, it will continue to speak to us today, in our own time, in our own circumstances. We can read something anew and feel like it is speaking directly to us today, even though it may have meant something different in the past. And that is due to the work of the Holy Spirit and Jesus’s continuing life as the Word of God.

I’d like to take a moment to have you share with someone near you. I have two different questions for you to consider, and you can choose one that speaks to you this morning.

1. Is there a passage that you keep coming back to? What makes it important for you?

2. Can you remember a time when you heard someone interpret scripture, and you just had the sense, “No, this can’t be right”?

The Bible is a marvelous gift to God’s people. It gives us a glimpse of how people have experienced God in the distant past. But it also continues to speak to us today in a new and different world. The Bible needs interpretation, it requires our attention, our struggle and conversation. Taking the Bible seriously means reading it closely and asking it questions, just like the eunuch from Ethiopia. But it also means listening for the continuing voice of the Holy Spirit and its message for us today, just like Philip did on that desert road centuries ago. By using our minds and our hearts as we read, and by sharing in holy conversation with our sisters and brothers in the faith, we become witnesses to the resurrection of Jesus, the Word of God.