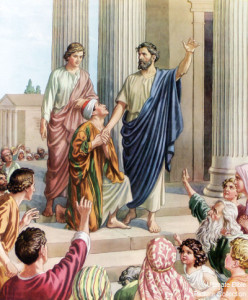 Today is the Third Sunday of Easter, a season that lasts 50 days from Easter Morning until Pentecost. This Easter Season, we are focussing on readings from the first ten chapters of the Acts of the Apostles. The Book of Acts is written by the same author who wrote the Gospel of Luke. Luke is the story of the life, death, and resurrection of Jesus. Acts is the story of the continuing work of God in the early church.

As I mentioned last week, our assigned readings in Acts this season jump around a bit. Last week we were in the end of chapter 4 and the story of how the whole Christian community in Jerusalem held their possessions in common with one another and no one was needy because the more affluent gave their possessions for the aid of the poor.

This morning we are rewinding back to beginning of chapter 3. This comes just shortly after the story of Pentecost, when the Holy Spirit came upon the early followers of Jesus, allowing them to proclaim the gospel in other languages they had never studied. There are about 3000 people in the church now, and it is growing.

In the midst of all of this excitement and change, two of Jesus longest-standing disciples make their way to the temple to pray. When Jesus started his ministry, he called four fishermen to follow him, two sets of brothers, first Simon Peter and Andrew, and then James and John. They left everything to follow Jesus. Now two of those fishermen, Peter and John, head into the Jewish temple to pray, as is their custom. Just where their brothers, Andrew and James, are is a mystery.

Peter and John make their way toward the temple for the evening sacrifice with all of the other worshipping Jews. And on their way inside, near one of the gates, they encounter someone. His name is not given. He has been disabled and unable to walk for his whole life. Consequently, he is unfit for any kind of job in the ancient economy. And so he does what would be expected: he begs to make a living. He has to have people carrying him to the gate of the temple every day and return him to wherever home is after the worshippers have left. On this day, as the worshippers are streaming in, he comes face to face with Peter and John.

The actual temple building, where only priests could go, wasn’t very big: perhaps as big as this sanctuary. But King Herod had completed a massive expansion and improvement to the temple courtyard, which was perhaps as big as ten football fields. The temple complex was designed with purity in mind. As you got closer and closer to the center, fewer and fewer people were allowed in. Anyone could come to the outer courtyard to pray and to hand over sacrifices to the priests. Even non-Jews could do this. But then there was a gate that only Jews could pass through, not gentiles. The next gate was only for Jewish men; women had to stay outside. The next area was only for priests and Levites, no lay men. Then just priests. Then only the high priest. We’re not sure exactly which Gate was the Beautiful Gate, maybe the gate that allowed Jews in but kept gentiles out. In any case, whichever gate was the Beautiful Gate, it would have been a funnel for hundreds of worshippers at the time of evening prayer, a good place for a beggar to be situated.

As Peter and John make their way inside, the man by the gate asks them for money, as would be expected. But Peter and John don’t drop a coin in his hand as they head in for worship. And they don’t just pass by without acknowledging him, either. Instead they do something very strange. They stop are stare at him. Then Peter tells the man to look at him and John, and he does. In the course three short verses, Luke uses four different words for looking. Everyone is staring at each other, and the man is still waiting to receive a gift from the apostles.

Then Peter starts to talk. He says, “I don’t have any silver or gold, but I’ll give you what I do have. In the name of Jesus Christ the Nazarene, walk.” And Peter reaches out and lifts him up.

And the man who has been disabled from birth, the man who has never ever stood, finds that his feet and ankles have become strong. And he doesn’t just stand. He stands, he walks, he jumps, he enters the temple, he leaps, and he praises God for the healing.

And before long he has attracted attention. The other worshippers recognize him as the beggar who could always be found outside the gate. And as the man is continuing to walk around and hang on to Peter and John, people start to gather in amazement to see what has happened.

And whenever Peter sees that he has a congregation, he decides it must be time to preach. He addresses them as fellow Jews, and he asks, “Why are you surprised? We didn’t do this. It’s the God of Abraham, Isaac, and Jacob who did this. God healed this man in order to glorify Jesus, the same Jesus who was handed over to Pilate to be crucified. You remember him. It’s only been a couple of months since he was crucified. Pilate offered to release him, but you chose a murder instead. But God has turned the tables. You chose the murderer, but Jesus is the author of life. He resurrection reversed death. We saw him risen from the dead with our own eyes.”

And then we get to a very strange part of Peter’s speech: verse 16. A fairly strict translation reads “And his name—by faith in his name—has strengthened this man whom you see and recognize. And the faith that comes through him has given him this wholeness in front of you all.” One commentator on this passage says that “it is garbled in Greek.” Another says, “This verse appears impossible.” It is very strange. And yet, it seems to be the key verse in this passage. It’s important in this passage, and it’s going to be important as we move ahead in Acts.

Luke seems to be trying to say a few different things simultaneously, and making a bit of a grammatical mess while doing it. The healing isn’t the result of anything special about Peter and John. The healing has to do with the name of Jesus. Peter uses Jesus’s name when he tells the man to stand up. But Luke doesn’t want us to think that Jesus’s name is like a magic word. It’s not just saying the name that causes the healing. It also has something to do with faith. But whose faith is it, exactly? Is it Peter’s faith? Is it the disabled man’s faith? Is it Jesus’s faith? It’s not entirely clear. And what is the faith in? Is it faith in Jesus’s name? If so, what does that mean? Is it faith in Jesus himself? Is it just faith in God? Again, it’s not entirely clear.

But what does seem to be clear is that this healing is supposed to vindicate Jesus. Remember that we’re only a matter of months after Jesus’s crucifixion. People knew that there had been some unrest in Jerusalem on account of Jesus, and that he had been arrested, tried, and executed by Rome. And some had heard the rumors that Jesus’s followers had not given up. They were circulating the story that he had been raised from the dead. And since the festival of Pentecost, their numbers had started to grow. But no one thought this was going to last. Jesus had been killed like so many other would-be Messiahs. It was taking a little too long for his followers to get the message that it was over. Jesus is dead and gone, and soon enough, his followers will be too.

This healing in public, in the temple, a healing of someone everyone knows has been disabled from birth, this healing is supposed to provide evidence to the contrary. That’s why it is important that the healing is done in Jesus’s name. Surely a healing performed by Jews, taking place in the precincts of the temple, during the time of evening prayer, surely that kind of healing must come from the Jewish God, from the God of Abraham, Isaac, and Jacob. And surely, if that healing were done in the name of Jesus Christ the Nazarene, it must mean that God approves of Jesus, it must mean that Jesus really is the Christ, Jesus really is the Messiah.

That’s what Peter tells the crowds. I know you thought that Jesus wasn’t anything. I know that’s what the priests and scribes thought. You just didn’t know the truth, that Jesus is the Christ. Now you know. God has proved it through this healing. Jesus has been vindicated. It’s time to accept it and turn back to God.

Perhaps Jesus is vindicated in the simple act of seeing another. That’s the other strange thing about this story, isn’t it: the looking and the seeing. Peter and John encounter a stranger, a beggar. What do we usually do when we see someone like that? Pretend we don’t see, keep looking forward and move on by? Or better, drop in a coin and keep walking?

Is Jesus vindicated by the way we regard a stranger? By the way we engage with those who are pushed to the margins? By the way we try to understand someone who is not like us, who does not pass in the same social circles? Perhaps Jesus is vindicated when instead of seeing a stranger, we take the time to see a human being. And perhaps when we take that time, we will see not just a human being, but a sister, a brother, a beloved child of God, made in the image of God. Perhaps when we take the time to see a stranger, we might even see the face of Jesus.