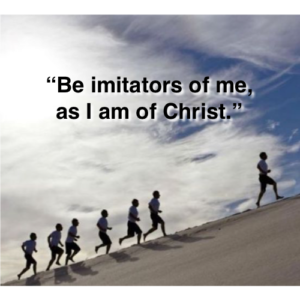 There are three phrases that jump out at me from the passage we have this morning in Philippians. “Be imitators of me,” “enemies of the cross,” and “citizenship in heaven.” So I want to take a little time considering each of them.

It’s always struck me as a little strange, the advice that Paul gives at the beginning of the passage we have today from the Epistle to Philippians. “Be imitators of me.” We might expect him to advise his readers to imitate Jesus, right? We even have a Latin term for that, the imitatio Christi, the imitation of Christ. But instead, here we have the imitatio Pauli, the imitation of Paul. That’s a fair bit of hubris to come right out and say, “You all should imitate me!”

But of course Paul has never really had a problem with self-esteem. Or at least he has never had trouble promoting himself. One of his many self-promoting speeches appears a little earlier in the letter to the Philippians. He’s arguing against his opponents, Christians who want new Gentile converts to be circumcised into the Jewish community. He says, “We don’t put our confidence in rituals performed on the body, though I have good reason to have this kind of confidence. If anyone else has reason to put their confidence in physical advantages, I have even more: I was circumcised on the eighth day. I am from the people of Israel and the tribe of Benjamin. I am a Hebrew of Hebrews. With respect to observing the Law, I’m a Pharisee. With respect to devotion to the faith, I harassed the church. With respect to righteousness under the Law, I’m blameless.” Paul saying that he is better than the people who oppose him. They say that you can only get right with God if you follow the biblical laws, if you stay Kosher and have your men circumcised. Paul rejects those standards, but at the same time he says that no one is better at fulfilling those standards than he is. There is no one who follows the biblical laws more zealously than Paul does. There is no one who is a more perfect Jew than Paul is.

So maybe we shouldn’t be surprised that Paul tells the Philippians to imitate him. He’s pretty confident about himself and his own abilities. He’s pretty sure that he is beyond reproach. So why not recommend that other Christians imitate him?

But what is it about his life that Paul wants people to imitate? He doesn’t want the Philippians to imitate his perfect observance of the biblical law. He’s pretty clear about that. Just after the section where he’s praising his own observance of the law, he writes, “These things were my assets, but I wrote them off as a loss for the sake of Christ. But even beyond that, I consider everything a loss in comparison with the superior value of knowing Christ Jesus my Lord. I have lost everything for him, but what I lost I think of as sewer trash, so that I might gain Christ and be found in him. In Christ I have a righteousness that is not my own and that does not come from the Law but rather from the faithfulness of Christ. It is the righteousness of God that is based on faith. The righteousness that I have comes from knowing Christ, the power of his resurrection, and the participation in his sufferings.”

Well, that leads us even farther back in to the letter to the Philippians, to the second chapter, and the most famous verses of the letter. They probably aren’t written by Paul at all. He’s quoting a very early Christian hymn, likely among the most ancient of Christian words that we have.

Paul tells his readers to adopt for themselves the same mind that was in Christ Jesus, and then he quotes the hymn: “Though he was in the form of God, he did not consider being equal with God something to exploit. But he emptied himself by taking the form of a slave and by becoming like human beings. When he found himself in the form of a human, he humbled himself by becoming obedient to the point of death, even death on a cross.”

For Paul, the story of Jesus is not all about glory. Yes, there is glory in the message of Jesus Christ, but it is glory that is always born out of weakness, vulnerability, and even suffering. The story of Jesus is a story of self-emptying, a story of vulnerability, a story of solidarity with human beings. And not just any human beings. It is important the Jesus is God incarnate in human form. But the particular human form is also important. He did not come as one with great earthly authority. In fact, Jesus made a point of rejecting earthly authority, of rejecting wealth and power. He came from backwater Galilee and wandered the countryside with nowhere to lay his head. The incarnation of Jesus is a sign of God’s solidarity with humanity, but it is especially a sign of God’s solidarity with people who are on the margins, people who have been left aside and counted out.

And that is a reality that Paul is very mindful of. It is important to know that when Paul tells the Philippians “Be imitators of me,” he is writing them a letter from prison. Paul is in jail for preaching of the gospel. That is the example that he hopes they will follow. Because Paul himself is following the self-emptying example of Christ. He is being emptied himself. He tells the Phillipians, “Even if I am poured out like a drink offering on the altar of service for your faith, I am glad.” He is happy even to face death if he is doing it for the benefit of others.

In today’s passage, Paul talks about those who are enemies of the cross. And when I first heard that phrase, I thought it was just a way of talking about people who aren’t Christians, that it was just a way of Paul excluding people who have not claimed Jesus as savior. But as I thought about it more, something else occurred to me. You know, the cross is scandalous. The idea that God, the perfect and all powerful, could come humbly in human form, that is scandalous. And the idea that that incarnate God could not only live as a human, but also die as a human, that is more scandalous still. And the idea the God could die in such a humiliating way, nailed to a cross, that is scandal upon scandal. It isn’t right. It’s not the way a God should behave. It is beneath God’s dignity. It is shameful, scandalous.

And that’s the point, Paul says. That is what makes the revelation in Jesus so remarkable. God in Jesus was completely shameless, no sense of dignity or decorum whatsoever. God in Jesus endured the utter humiliation of death on a cross. Why? For you and for me. To show us that there is no place that we can go that will separate us from God’s love. There is nothing we can do that can shame God. There is no pain we can endure that is too much for God to understand. There is no amount of guilt or shame that we can feel that will hinder God’s ability to love us. That is the scandal and the miracle of the cross.

And recognizing that fact, and accepting that love makes us what Paul calls citizen’s of heaven. Being a citizen of heaven means that we belong, even when we don’t feel like we belong here on earth. Even when we feel alienated from the world, from our families, from the people at work or the kids at school, we aren’t alienated from God. In God’s Kingdom, we belong. We are citizens of heaven. Even when we feel like we are disempowered, like our voices don’t matter, like we are pawns in someone else’s game, we are not disempowered in God. In God’s Kingdom, we have the full rights of citizenship. We are full members. Our voices matter. Our gifts and service are needed. We are citizens of heaven.

Melissa and I just got back last night from a conference for adoptive and foster parents. It’s called Refresh, and it’s hosted by Overlake Christian Church near Seattle. The theme this year happens to fit perfectly with the text we have before us this morning: Beautiful Surrender. It comes from a contemporary Christian song of the same name by Melissa and Jonathan David Helser. And I want to close this time today by sharing it with you. I didn’t give anyone any warning, so there won’t be any words on the screen, but if you start to catch on to it, I’d love to have you sing with me. Beautiful Surrender.