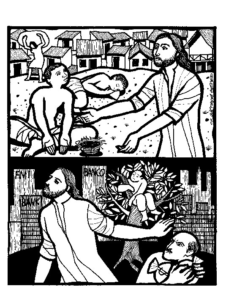 Most of you have heard of the Sermon on the Mount. In the Gospel of Matthew, toward the beginning, but after Jesus has begun his ministry, great crowds of people come flocking to Jesus for exorcism and healing, and he climbs up onto a high place and begins to preach to them. He gives a series of blessings that we call the beatitudes, which is just a fancy way of saying blessings. Blessed are the poor in spirit, for theirs is the kingdom of heaven. Blessed are those who mourn, for they shall be comforted. And he goes on preaching for three chapters, talking mostly about ethical issues. For some groups of Christians, particularly Mennonites and other Anabaptists, those three chapters of Matthew are the most important words in the entire bible. The Sermon on the Mount is the lens through which they look at every other part of the bible. Blessed are the peacemakers, for they shall be called children of God. You are the salt of the earth. You are the light of the world. Every man who looks at a woman lustfully has already committed adultery in his heart. If your eye causes you to sin, tear it out. Let your yes be yes and your no be no. Turn the other cheek. Go the extra mile. Love your enemy. Don’t let your left hand know what your right hand is doing. Where your treasure is, there your heart will be also. Don’t worry about your life, what you will eat, or your body, what you will wear. Don’t judge, lest you be judged. Take the log out of your own eye so you can see clearly to take the speck out of your neighbor’s eye. Ask and you will receive, knock and the door will be opened. Go in through the narrow gate. Watch out for false prophets. The house built on a rock. Almost every word of the Sermon on the Mount would be familiar to most of you. It has a key part of Christian teaching for two thousand years.

It is so popular that almost everyone forgets about the Sermon on the Plain. It’s found not in the Gospel of Matthew, but in the Gospel of Luke. It happens at just about the same part of the story, early in Jesus’s ministry, as great crowds of people are flocking to him for exorcism and healing. And again, he prepares to address the crowd. But instead of climbing up to a high place, like Matthew tells the story, Jesus descends from a high place and comes down to the level ground, comes down to the plain, before he begins to speak.

The Sermon on the Plain is shorter, but it covers some of the same ground as the Sermon on the Mount. Turn the other cheek. Love your enemies. Don’t judge, so that you won’t be judged. Take the log out of your own eye. The house built on a rock. But although the both sermons hit some of the same key notes, they are not the same. And since the Sermon on the Mount has been so much more central to Christian teaching, few of us have taken the time to notice what it is that Jesus has to say in Luke’s version of the story. In fact, just this week I was reading a modern-day retelling of the Gospel of Luke, called Esperanza Reyes, when it came time for the Christ character to deliver this sermon, the author substituted in some of the words from Matthew rather than staying true to the words in Luke. So let’s take a closer look at what it is that Luke’s Jesus has to say, and what Luke’s Jesus leaves out.

And that should sound a little bit similar and a little bit different to the version that you have running around in your head. Both Matthew and Luke have that extra-long beatitude at the end that talks about being hated because of Jesus, but I want to set that aside for right now and look and the rest of the beatitudes.

But that may not be the biggest difference. The biggest difference isn’t in what Luke’s Jesus says, it’s in what he doesn’t say. You know the familiar version from Matthew, right? “Blessed are the poor… in spirit.” Who are the poor in spirit? People who have weak faith? Or maybe people who have strong faith? People who are simple? It’s hard to say for sure. But one thing we can say is that it probably doesn’t have anything to do with people who are actually poor. If I talk about the poor in spirit, chances are you will not think about people who are in actual economic trouble. You’ll be thinking about their prayer life or their attitude to God, not about whether they can afford to pay their rent, or feed their kids, or pay for their medicine. Matthew talks about the poor in spirit.

But Luke talks about the actual poor. Blessed are you who are poor. There’s no metaphor here. It is just what it says. Jesus is talking about people who are worried because they can’t pay all of their bills, or because they’re not sure where their next meal is coming from, or because they have to choose between their kids prescription and the electric bill. Jesus is talking about actual poverty, about real, tangible, physical, in-the-real-world need. Blessed are you who are poor, because God’s kingdom belongs to you.

And it’s the same with Luke’s second blessing. Matthew’s version is “Blessed are you who hunger and thirst… for righteousness.” What does that mean? Someone who tries extra hard to be holy? Or maybe someone who is an activist for social justice? Maybe just someone who hopes for a more just or a more righteous society in the future? It’s hard to say. But it doesn’t mean someone who is actually hungry. Matthew talks about some kind of metaphorical hunger for righteousness.

But Luke talks about actual hunger. Blessed are you who are hungry now. There’s no metaphor. Jesus is talking about people who have been skipping their own meals so they can feed their kids, about people who aren’t sure whether they will have food tomorrow, about people who have to choose unhealthy food because it’s cheaper. Jesus is talking about actual hunger, about real, tangible, physical, in-the-real-world hunger. Blessed are you who are poor now, because you will be filled.

That’s a big difference. Blessed are the meek for they will inherit the earth; blessed are the merciful, for they will receive mercy.” It’s all a bit etherial, isn’t it? Scholars call the difference between Matthew and Luke spiritualiztion. Matthew spiritualizes the beatitudes. They stop being about real, everyday pain, and they become something that only happens in the mind. There’s a big difference between being poor in spirit and actually being poor.

Even someone who is very rich can convince themselves that they are poor in spirit, and so they can receive the blessing from Jesus. It’s not that easy to convince yourself that you’re poor when you aren’t. And that’s the way with most of Matthew’s beatitudes. If I put myself in the right mind, then I can receive all of the blessings. Sure, I’m poor in spirit sometimes. Sometimes I’m meek. Sometimes I mourn. Sometimes I’m merciful, pure in heart, a peacemaker. I can receive all of those blessings, and they don’t imply that anything about my life will be changed. They don’t challenge me or even much about my society. They make me feel good.

And it’s all the more challenging because Luke’s Jesus doesn’t just offer blessings, he gives curses as well. We usually call them the woes. Woe to you who… But who talks like that? We know what the opposite of a blessing is, right? It’s a curse.

It’s a radical Jesus that we get in the Gospel of Luke. If you want a religion that stays out of politics, then don’t read this gospel. Here, Jesus shows up on the scene and gives his mission statement: “The Spirit of the Lord is upon me because the Lord has anointed me to preach good news to the poor, to proclaim release to the prisoners and recovery of sight to the blind, to liberate the oppressed, and to proclaim the year of the Lord’s favor.” And he doesn’t deviate from that mission. Good news for the poor. Release for the captives. Liberation for the oppressed. That is how Jesus defines the Kingdom of God. It’s not some far-away place off in heaven. The Kingdom of God is good news for the poor, release for the prisoners, recovery of sight for the blind, and liberation for the oppressed.

Jesus comes to level ground, and he proclaims, The Kingdom of God has come near. Thanks be to God. And let us live as citizens of that Kingdom, not high above those whom we think are outside, but down on level ground, face to face, brothers and sisters because we are all children of the same God, a God who calls us to live out the Kingdom, here and now, and wherever we may go.