Sunday 13 May 2018
Feast of Matthias, Seventh Sunday of Easter 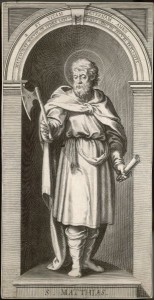 St Matthias, apostle chosen to replace Judas Iscariot, who defected : the axe he holds is the one which was used to remove his head

We are almost at the end of our seven-week Eastertide journey through Acts. So it is a little strange that this morning we’re jumping back to the beginning. Out of all of the readings we will touch this season, the one this morning comes earliest. It comes even before the Pentecost, which we will celebrate next Sunday. It’s only 40 or 50 days after Easter Sunday. The disciples have seen Jesus appear to them in his resurrected form several times. On the last time, they saw him ascend into heaven. Then they return to Jerusalem, to an upper room, and devote themselves to prayer. Luke tells us that eleven remaining apostles are there—Peter, James, John, Andrew, Philip, Thomas, Bartholomew, Matthew, the other James, Simon the zealot, and Judas, not the Judas who betrayed him—along with several of Jesus’s female disciples, his mother Mary, and his four brothers: James, Joseph, Judas, and Simon. It can be a little confusing because there are lots of people with he same names. Gathered in the upper room, there are at least three Simons, three James’s, and two Judas’s: but neither of those Judas’s is the Judas who betrayed Jesus. And there are probably at least three Marys.

That’s where we pick up with the reading this morning. As in nearly every passage that we’ve read in Acts this season, the action starts when Peter stands up and starts to speak. You can say what you want about Peter, but one thing he is not is shy. Peter knows that he and the rest of the disciples have been ordered to wait in Jerusalem until the coming the Holy Spirit. That’s what’s going to happen next in the story, and it’s what we’ll read next Sunday. But before they can get to Pentecost, there is a problem that needs to be addressed. Early in his ministry Jesus had appointed twelve of his disciples to be a part of a special group, the Twelve, who were going to be apostles. They were to be sent out to the twelve tribes of Israel.

But there is a problem. There are only eleven of them left. Judas has betrayed Jesus, sold him out for a bag of silver. And Luke tells us just what happened to Judas and the money he was paid for Jesus’s blood. Judas has created a problem not just for himself, but also for the Twelve. How can they inaugurate the New Israel if the Twelve is now only the Eleven. The optics are all wrong. They’ll have to find someone to replace Judas.

And here’s the part that I find fascinating. Peter says they need to choose someone who has been with them and witnessed everything that Jesus has done from the beginning when John the Baptist was still on the scene until the present, just after Jesus has been taken away into heaven at his ascension. Doesn’t that seem a little strange? Who could possibly have been with them all that time? Wouldn’t we have heard of them before this point in the story?

But not only are they able to find one extra man who has been with Jesus from the beginning, they are able to find two. Which implies that there must have been even more than that around. How many unnamed disciples have been with Jesus this entire time but we never hear them named at all or their stories told?

So two of these hitherto unknown disciples are put forward for the position: replacement twelfth apostle. The first candidate is Joseph. He’s also called Barsabbas. And he has a second nickname: Justus. The other candidate for the job is Matthias.

And then, like any good human resources team, the two candidates submit their resumés and cover letters, they go through a series of interviews, they each give a model sermon for everyone to compare, and then they all vote on who should be the next apostle. Oh wait, no, that’s not what happens. No, they leave it up to chance. They cast lots. That’s like rolling dice or drawing straws. The ancients did this as a kind of divination, a way of determining the will of God. They could just have easily read tea leaves to make the choice, or studied the entrails of a goat. The decision for who is going to be the next apostle is left up to a coin toss.

The coin toss favors the second candidate, Matthias, and he becomes one of the twelve. And then, of course, he becomes an integral part of the expanding Jesus Movement, and we hear about his missionary trips. Oh wait, that doesn’t happen either.

What actually happens is that we never hear another word about Matthias again, or about Justus, for that matter. He completely falls out of the narrative. He is never mentioned before this passage, and he is never mentioned after this passage. His job is just to get the apostles up to the required number, twelve, and that’s all. Interestingly, when another of the apostles is killed ten chapters later in Acts, James the son of Zebedee, no effort is made to replace him. But it is important somehow that Matthias replaces Judas.

Even our sources outside the Bible aren’t very clear about Matthias’s life. Maybe he went to the region of modern Georgia, maybe he stayed in Jerusalem. Maybe he was stoned to death and then beheaded, maybe he lived into old age. He is usually pictured with an axe, which seems strange if he was supposed to be killed by stoning. His story is almost entirely clouded to us, except for this brief passage in which he is chosen by chance to become the thirteenth apostle, his only qualification being that he seems to have been hanging around for a while now, and then he is never heard from again. His full story is never told, and the one thing that makes him famous happens only by chance.

In our modern world, we don’t tend to give much credit to chance. In the post-Enlightenment world of science, democracy, and capitalism, I am the hero of my own story. I make the choices about my own life. I set my own goals, and then I work hard and achieve those goals. If I have something, it’s because I earned it. If I do something, it’s because I chose it. If I end up in a certain place, it’s because that’s where I took myself. Follow your dreams! You can do anything you put your mind to, right? But, truth be told, there is quite a lot more chance in our stories than we might want to admit.

When I was in high school, jazz choir was a really big deal. That was the elite singing group at every school. And my high school, South Salem, had one of the best. I remember the first time I saw them. Most jazz choirs would stand on risers like any other choir, and there would be area microphones that covered the whole choir. But not with the Southernaires. Sixteen singers, and every single one of them had their own mic. The piano player might take a four-minute solo at the beginning of a particularly heart-wrenching ballad. To a seventh-grade musician, they were like Olympian gods up on the stage, like nothing I had ever seen before. Even when I was a freshman and in the JV jazz choir, they seemed like immortals. At the fall jazz festival that they hosted, the Southernaires gave roses to every member of our underclassman jazz choir. I got mine from the bass player, Andy Turnbough. Of course, I pressed it, put it in a frame, and hung it in my room like some kind of holy relic. I’m pretty sure it’s still hanging there at my parents house.

It was only a few months after that when I got called into Mr. Wenz’s office. Pete Lamb, the Southernaires piano player had dropped in the middle of the year, which was absolutely unheard of. It was scandalous, a betrayal. He got a retroactive F for the first semester. But now there was an opening in the rhythm section of Southernaires. Someone had to fill it. And the lot had fallen on me. They were playing a festival in two weeks, and now I was the one who was going to play the four-minute piano solo. I was only the second freshman ever in Southernaires, and I was so not prepared for it. I remember I got assigned the only remaining Southernaire t-shirt, which was a men’s XL. I think I weighed about 96 pounds at the time. Wearing it seemed like the perfect visualization of how I felt: completely overwhelmed and not nearly big enough for the task. But what was I going to do? The spot had to be filled. So there I was, completely, as it seemed, by chance.

I’m sure I am not the only one here who has felt like that. I’ll bet every one of could tell a story about when you were faced with a role or a task that you were not expecting, that you were not prepared for, that you did not feel equal to. But you know what, someone had to do it, and this time it was going to be you.

[In fact, why don’t you take a moment to tell someone near you that story.]

It happens to us over and over. Who ever feels prepared to pass from elementary school to middle school, or from middle school to high school, or from high school to college? Who is ever prepared for intertwining your life with someone else’s in marriage. Who is ever prepared to be parent? Who ever feels ready to pray in public for the first time? I know I was terrified. Starting a new job, leading a meeting, organizing a fundraiser. Caring for a sick family member, facing a chronic illness, living in the wake of death. Going to a protest for the first time, sharing your story of faith, apologizing and seeking forgiveness when you have wronged another, opening yourself up to a stranger. It’s not easy. But sometimes the lot falls to you—sometimes by chance, sometimes by God’s calling—and you just have to do the task that has been set before you, whether you feel ready for it or not.

We will all face those times when the road ahead seems too difficult, or too scary, or too unpredictable. But we have the example of Matthias, who answered when he was called. Even more importantly, we have the companionship of Jesus, who knows us and loves us and walks with us every step of the way. Even if nobody knows the trouble you’ve seem, nobody knows… but Jesus. You may not feel ready, but he is. You may not feel up to the task, but he is. There is no load too heavy for him, no road too long. And just as he has done for his disciples in every age, no matter what it is you are facing, Jesus will never leave your side. Glory, Hallelujah.