Sunday 30 September 2018
The Nineteenth Sunday after Pentecost, Lectionary 26B 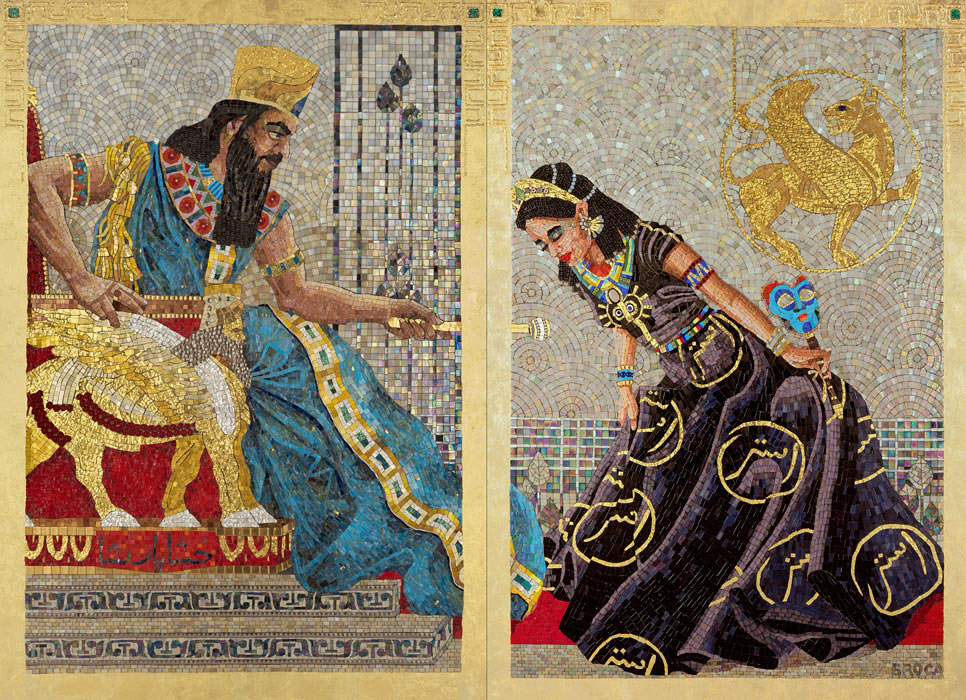 The story of Esther is one of my favorite bible stories. But it’s a bit hard to tell what’s going on when we only hear the short snippet of the story that was assigned for us this morning. So let’s give ourselves a little more context, tell a bit more of the story. I’m going to need your help. You see, the book of Esther tells the story of one of the greatest festivals in the Jewish calendar. It’s called Purim, and every year on the 14th of Adar, which is coming this year on the 20th of March, Jews all over the world gather together to hear the story of Esther read and acted out. It’s a real celebration, almost like Carnival, and the reading of the story requires raucous audience participation. When Melissa and I attended at a temple in Denver, they performed Esther as a musical, in the style of Grease. Unfortunately, today you’ll have to do with just me telling the story, but we can still have you involved with some audience participation.

So here is how it works. There are four main characters in the story: King Ahasuerus,  Mordecai, Queen Esther, and Haman. Whenever I mention King Ahasuerus, I’m going to need you to give me a trumpet fanfare, “Do-do-do doooo.” Alright, let’s practice. KING AHASUERUS. Good. And whenever I mention Mordecai, you say, “Mordecai, what a guy.” Alright. MORDECAI. Now, when I say Queen Esther, you cheer. Okay. ESTHER. And finally, the villain: Haman. When I mention Haman, you boo. Also, you might find a noisemaker of some kind at the end of your pew. So, when I say Haman, you say “Boooo!” and shake your noisemaker, or you stomp your feet, or you drum on a hymnal, because we need to drown out the sound of villain’s name. Ready? HAMAN. Great. Now here we go.

After the time that the Jews had been deported and spread all over the known world by the Babylonians, and after the Babylonians had been conquered by the Persians, there was a ruler of the Persian Empire named KING AHASUERUS. KING AHASUERUS was very powerful and very wealthy. He threw a huge party for all of his nobles that lasted 180 days. At the end, when he was good and drunk, KING AHASUERUS ordered Queen Vashti to leave the dinner she was hosting for the women and to come in to the men’s party and show off her beauty to his guests, but she refused. KING AHASUERUS was furious. He consulted with his advisers and decided to depose Queen Vashti and look for a new queen. They couldn’t have the women of the empire looking at Vashti’s example and thinking that they could disobey their husbands. That would cause the societal structure to fall apart. And so word went out to all the land that all the pretty young virgins should come to the palace to compete in Persia’s best new reality TV show, “Persia’s Next Top Royal,” and the best of the best would get a chance to be a part of the harem of KING AHASUERUS. So beautiful women from all over the empire came to compete, including a Jewish woman named ESTHER.

Now ESTHER was an orphan, and she had been adopted by her cousin, MORDECAI. MORDECAI signed her up for the competition, and ESTHER went off to harem boot camp for a whole year, preparing and making herself beautiful before she met KING AHASUERUS. When it came time for ESTHER to appear before KING AHASUERUS, she went, and he fell in love with her at first sight. KING AHASUERUS declared that ESTHER should be queen, and he put the royal crown on her head. But ESTHER never told anyone that she was a Jew, because her cousin MORDECAI had warned her not to.

About that same time, KING AHASUERUS appointed a man named HAMAN to be his chief deputy. HAMAN was a very vain and power-hungry little man. Whenever HAMAN went out in public, he demanded that everyone bow down to him. And everyone did, because they were afraid of HAMAN and what he might do to them. Everyone, that is, except for MORDECAI.

When HAMAN noticed that MORDECAI wasn’t showing him the proper respect, he was infuriated, and he plotted how to get back at MORDECAI. HAMAN decided to convince KING AHASUERUS that the Jews, the people of MORDECAI, were a deviant people who didn’t follow the royal laws and needed to be exterminated. And HAMAN did just that. HAMAN sent letters out with the royal seal to every province that on a certain day, the 14th of Adar, every Jew in the world should be slaughtered.

When the Jews started to hear the news, they were terrified of HAMAN, and of his evil orders, and they began to fast and pray. MORDECAI also fasted and prayed, wearing sackcloth and ashes. He sent word to QUEEN ESTHER telling her about the news and asking her to convince KING AHASUERUS to rescind the order.

But ESTHER could not go, because no one was allowed to visit KING AHASUERUS unless they were invited by KING AHASUERUS, and ESTHER had not been invited in over a month. She prayed and fasted for three days. Then she put on her best royal robe, took a deep breath, and knocked on king’s door, knowing that it could mean her death.

But when KING AHASUERUS saw QUEEN ESTHER, he was happy to see her, and he promised to grant any wish that QUEEN ESTHER might ask of him. ESTHER invited KING AHASUERUS and HAMAN to come to a banquet that she would host. And they did.

At the end of the banquet, KING AHASUERUS again asked QUEEN ESTHER what wish she wanted him to grant. And again ESTHER invited KING AHASUERUS and HAMAN to another banquet the following night, and they agreed. After another sumptuous meal, KING AHASUERUS asked ESTHER a third time, “What do you want me to give you?”

That’s when ESTHER finally told him. “Give me my life,” she said “and the lives of my people. For this wicked HAMAN has plotted against us to kill us.” KING AHASUERUS was enraged, and he ordered that HAMAN be hanged on the same gallows that HAMAN had constructed for MORDECAI. KING AHASUERUS promoted MORDECAI to take the place of HAMAN as his chief deputy, and ESTHER and MORDECAI declared a day of celebration for all Jews everywhere, because the plot of HAMAN was turned against him. And MORDECAI and ESTHER and KING AHASUERUS lived happily ever after, because QUEEN ESTHER had the courage to speak out for what was right. THE END.

Definitely an interesting story, if a bit gruesome in places. It would be worth reading just for the entertainment value. And when you have time, you should definitely read the whole story; it takes less than an hour and is quite well written.

There are a lot of social things going on here. There is gender and sexual violence. The order that the king gave was for Queen Vashti to come and display her body before a room of drunken men. Her quiet act of refusal to be victimized is met with swift and extreme punishment. The king and his officials are concerned that if the women of the empire hear that Queen Vashti disobeyed the king, they will realize that they can disobey their men, and there will be an uprising. The presumption is that all women are absolutely subject to their men. We’ve certainly made some progress since then, but not enough.

There’s also race and religion in this story. When Mordecai snubs Haman, it’s not just him that get punished. A single failure of someone from a marginalized group means that an entire people are painted with the accusations of treason. Somehow the refusal of Mordecai to bow leads to an order for the genocide of all Jews.

There is certainly plenty in this story to make us think about the injustices in our own society. The way public anger is expected when it comes from men but punished when it comes from women. The ways that scandals are attributed only to the guilty person when they come from the dominant group, but when they come a marginalized group, the failure of one is treated as a failure in the entire race. There is the question of who gets to speak, and whose permission they have to get to do it.

But there is also reason for hope in this story, in the person of Queen Esther. She comes from nothing. She is a Jew living as a refugee in a foreign land. She is an orphan. She doesn’t come from means. But by a stroke of fate, because of her good looks, she is placed in a position of great affluence. When the order comes down that her people are to be killed, she doesn’t have to do anything. No one knows that she’s a Jew. She can pass for Persian. She could live on just fine as the king’s favored wife. And if she does try to do something, she risks banishment or even death. Her predecessor was deposed for far less. Even though she is a queen, she is, in her culture, only a woman. She would have to defy both the powerful Haman and the all-powerful king if she were going to stand up for her people. It’s clear from the story that she doesn’t expect to be successful. She expects to be executed simply for disturbing the king’s privacy, let alone for questioning his decrees.

And yet, even knowing, even expecting death, she summons her courage, and she tells her story. She stands up for what is right. She pleads the case of her people—not for herself, she is safe from the execution order—but for her sisters and brothers. She lays aside her own safety, lays aside her own life, simply for a chance to save a people who have no voice, who have no advocate except for her.

That is the kind of self-sacrifice that we expect only from Jesus, who also laid aside his life for the chance to save a people with no voice. And it is an example to us. It is an example that even the most lowly, the most overlooked, have the power to make great change. And it is an example of how someone who has gained a certain standing, a certain power in society, can use their power, must use their power, not to advance their own cause, but to look out for the people who have been left behind. It is a story of tremendous courage, and it shows us a way to live. It shows us not to cling to the things that we have, to the status that we have, but to use our influence, to use our status to help those who don’t have it, and to be willing to give it up for the sake of others. As the words of Jesus tell us, “Humankind has no greater love than this, to lay down one’s life for one’s friends.”