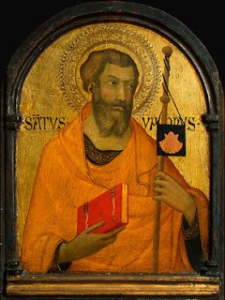 There is also a Book of James in the New Testament. It is particularly concerned with the place of the poor in the Christian church. So which James wrote the Epistle of James? Well, we don’t know. The author identifies himself as James but doesn’t give us enough other information to know which James he is. He is most often identified with James the Just, the brother of Jesus, but is sometimes identified with our James, James the Great.

We also have to take a minute to talk about the name, James. In Hebrew, the name is יעקב, Jacob. The Greek version that is written in the New Testament is Ιακωβος. Again, the English equivalent is Jacob. But the name Jacob has a very strange history as it made its way from 1st-century Greek to 20th-century modern languages. The English name James comes through the Italian Giacomo, which is a variant of Giacobo. In French, James is Jaques. In eastern Spain, it becomes Jacome or Jaime. But in other forms of Spanish, it becomes Diego. So San Diego means St. James. In some forms of Spanish, that gets mashed together into one word, Santiago. The major pilgrimage in Spain, the Camino de Santiago de Compostela, leads to the church that purportedly holds the remains of our James, James the Great. And the pilgrimage is marked by St. James’s symbol, the scallop shell.

Alright, after far too much prelude, let’s get into the actual life of James. He appears first in the gospel mending fishing nets with his brother John and their father Zebedee. Jesus comes along and says, “Come, follow me.” And they get up, leave their father in the boat, cast everything aside, and follow him. Jesus must have been amazingly compelling to get those four fishermen—Peter, Andrew, James, and John—to leave everything behind and follow him. I’m not sure what it says about the four of them. Did they follow this stranger because they were faithful? Because they were reckless, wild, adventurous? For whatever reason, they did follow Jesus. And the four of them—Peter, James, John, and sometimes Andrew—become the core, inner circle, of Jesus’s followers.

Early in the story, James is there with John and Peter and Andrew when Jesus heals Peter and Andrew’s mother, who had been suffering with fever. He is witness to many miraculous healings and exorcisms. He sees Jesus’s ministry right from the beginning.

When Jesus sends out his disciples two-by-two in Mark 3, there’s an interesting detail about James and John. He sends the two brothers out as a missionary team. But he also gives them a nickname. He calls them Boanerges, which means Sons of Thunder. It kind of sounds like he might be calling them Sons of Zeus, Sons of Jupiter, or Sons of Thor. But he’s not actually saying anything about their parentage. Jesus is called Son of Man, which is just another way of saying that he is human, it didn’t start out as a special title. Jesus is also called Son of God. But contrary to what you might suspect, Jesus isn’t the only person in the Bible called Son of God. King David is also. Son of God could mean someone who is claimed by God, or someone who has the attributes of God. Son of Thunder means someone who has the attributes of thunder. What does that mean exactly. We’re not entirely sure, but probably someone with a hot temper, someone who is boisterous or boastful.

James always appears alongside his brother John. They remind me a bit of Fred and George Weasley, from the Harry Potter book series. Brothers who are always together, always getting into trouble, always with flash and panache.

It’s not long after that, when James and John have had several special opportunities to be with Jesus at his most amazing miracles, that they approach Jesus with a question. It’s in the gospel passage we read this morning. They approach him kind of like a pair of kids. The version we read this morning reads, “Teacher, we want you to do for us whatever we ask.” It’s roughly equivalent to, “Will you do something for us if we ask you?”

And like any teacher or parent, Jesus asks for some clarification. “Um, what do you want me to do for you, exactly?”

Mark implies that James and John don’t really know what they’re asking for. They don’t know what is in store for Jesus. They don’t understand that he is headed toward crucifixion and death. What they see is that he is having fame, gathering followers, gathering power, and that he is on a collision course with the Jerusalem establishment and with Rome. They want to sit on either side of King Jesus when he recaptures Jerusalem and expels the Roman Occupation once and for all.

And so Jesus confronts them, “You don’t know what you’re asking! Can you drink the cup I drink or receive the baptism I receive?”

“We can,” they answer, even though they don’t know what he means.

“You will,” Jesus responds. “You will drink the cup I drink and receive the baptism I receive.” He is talking about death. Jesus is saying that, like him, they will face persecution and death on account of God’s mission. They will drink from the same cup of suffering, be baptized with a baptism of blood.

But their request stirs up the other disciples. Who do they think they are asking to sit at Jesus’s right and his left? And Jesus has to correct them all. “If you want to be a leader in God’s Empire, you have to be a servant. If you want to be first, become a slave of everyone.”

In another episode, the Sons of Thunder show their fiery side again and have to be corrected by Jesus. As Jesus is traveling, he comes to a Samaritan village that refuses to welcome him. They knew his mission lay somewhere else and among a different people. But James and John are indignant. “Lord, do you want us to call down fire from heaven to consume them?”

That’s rather confident of them to think that they could call down fire from heaven like the prophet Elijah had done in centuries past. And it’s rather bold of them to think that Jesus would need them to do such a thing. Jesus sternly rebukes them. That is not what God’s Empire is about. That is not the message of Jesus’s gospel. It does not rule by force or fear. It does not preach revenge and retribution.

Toward the end of the mission, James is there with Peter and John as Jesus prays in the Garden of Gethsemane and asks God three times, “Take this cup from me. But not my will. Let your will be done.” He falls asleep each time Jesus pleads with them to stay awake. James is there when Jesus is arrested. He flees like all of the other male disciples. He hides behind locked doors with them. He refuses to believe the testimony of Mary Magdalene and the other women who found the empty tomb and saw the risen lord.

But James’s story ends too early. As the church is just beginning to spread, James is caught in the violent crackdown of this new movement. King Herod wants to make a statement. Now, this isn’t King Herod the Great, who tried to kill Jesus when he was a baby. And this isn’t Herod the Great’s son, Herod Antipas, who put Jesus on trial. This is Herod the Great’s grandson, Herod Agrippa, whom the Romans made King of Judea between 41 and 44 CE. He wants to suppress these pesky Christians, and James, son of Zebedee is captured and beheaded by sword in Jerusalem.

His death is notable because he is the first of the twelve to be martyred. Judas had already died after he betrayed Jesus, and he was replaced by Matthias. But James is first to die while still faithfully serving Jesus. He dies a martyr, and his story becomes an inspiration for others who would follow. He is not afraid to follow Jesus even to death. He does drink of the same cup. He does share in the same baptism.

And James is arguably more famous in his death than in his life. According to tradition, James’s remains were transferred from Jerusalem to Spain. They were eventually move to Compostela. People began to travel there to visit his shrine. Eventually it became a major site for pilgrimage. While Rome was still the favored pilgrimage site of the rich, the poor went to Compostela and to St. James. The Camino de Santiago de Compostela is now the most traveled pilgrimage in the Christian world. Even non-Christians often pack their backpacks, take of the scallop shell of St. James, and walk along the ancient way.

James is a model to us in his boldness. He was among the first to accept Jesus call, leaving everything behind to follow. Brash and exuberant, he sometimes got ahead of himself. Faithful to his brother and to Jesus, he continued on the way. And though he did not seek it out, when his Christian journey eventually led to the sword, he did run away, just as Jesus had not run away from the cross.

James calls us to make our own journey along that pilgrimage way. He invites us to step out in faith, to leave behind the things that weigh us down, and to follow Jesus, not knowing where he will lead us or how our journey may end. May we be bold to follow Jesus when he calls, and to stay on the path, even through hardship or suffering, knowing that the one we follow is the Lord of Life.