Sunday 21 October 2018
The Twenty-Second Sunday after Pentecost, Lectionary 29B 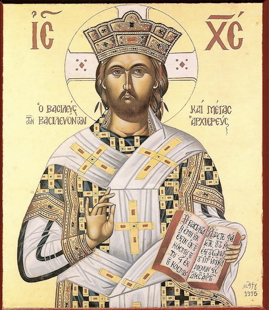 Last week I mentioned that Hebrews is erroneously labeled in some Bibles as Paul’s Epistle to the Hebrews. However, it is not written by Paul. It’s an anonymous work and no one really has a clue who wrote it. It’s not an epistle, either, which is just a funny word for a letter. And, since it’s not really a letter, it’s not addressed to the Hebrews either, whoever they might be. Instead, it’s a sort of theological treatise, with no particular known audience, and no known author. In this sense, it is unique among the books of the New Testament.

In addition to that, Hebrews is fairly unique in terms of its content. It is the only book of the New Testament to refer to Jesus as a priest, more specifically as a high priest. Hebrews goes on for several chapters talking about Jesus as a high priest. And since this is a rather unusual way to talk about Jesus, perhaps we should take a few minutes to explore that image further.

In ancient Israelite religious practice, priests served in the temple, offering the sacrifices of the people to God. By tradition, they were all descendants of Aaron, the brother of Moses, or at least of his ancestor, Levi, one of the twelve sons of Jacob. You might remember that Zechariah, the father of John the Baptist, was a priest who was serving in the temple when he received a revelation about the birth of his prophetic son.

The temple was divided into sections that became increasingly more holy and more restrictive as one got closer to the center. There was an outer courtyard where anyone could come. This is where the moneychangers were, and the people who sold animals for the sacrifices. The next level was the court of the women. No gentiles could enter here, but any Israelite women or men could. Next was the court of the Israelites. Women could not go into this section. Then there was another area where one had to be at least a Levite to enter. Then an area where only Aaronic priests could enter.

The innermost sanctum of the temple was the Holy of Holies. That’s where the Ark of the Covenant was kept. It was supposed to be the dwelling place of God on earth, the footstool of God’s heavenly throne. The earthly temple was thought to be a copy of the real temple in heaven. The holy of holies is where those two temples met, with God seated in the heavenly temple and God’s feet resting in the earthly temple.

Only the high priest could enter into the Holy of Holies, and then only once a year on Yom Kippur, the Day of Atonement. When it was time, he would dress in special priestly garments and perform special cleansing rituals to get ready. The other priests would tie a rope around his ankle, and he would enter into the most sacred place on earth. There, he would offer special blood sacrifices for the sins of the people. The rope was on his ankle in case he died while he was in there. No one would be able to go in after him. They’d have to drag him out with the rope.

By the time that the Book of Hebrews was written, there was no temple in Jerusalem. It had been destroyed by the Romans in 70 AD, by armies led by the new Emperor Vespasian and his son, the future Emperor Titus. They conquered Jerusalem, leveled the temple, and took it’s treasures away to Rome, installing them in the new pagan Temple of Peace. They issued coins celebrating the destruction of Jerusalem and the pillaging of the temple. They also ruled that they would never allow the temple to be rebuilt. Without a temple, there were no sacrifices. And without sacrifices, there was no way to atone for the sins of the people. There was no Holy of Holies, and no high priest to enter it once a year, on behalf of the people of Israel, to make a sacrifice for the atonement of their sins.

It’s strange for us to think about. We don’t live in a culture that practices blood sacrifice. But in the ancient world, every religious tradition practiced blood sacrifice, including God’s chosen people, the Judeans. Everyone thought that the gods required animal sacrifices, including sacrifices of blood, in order to keep humanity on their side. That’s why it was such a big deal that the Romans forbade the reconstruction of the Jerusalem Temple. It meant that Jews would never have any means of getting right with God. Without a temple, without sacrifices, without a high priest, there could be no forgiveness of sins, and the sins of the people would just keep piling up, bringing down curses on them. It was a huge theological crisis. How could God’s people worship God without the temple? How could the people get right with God?

This is the question that the Book of Hebrews seeks to answer. And the answer that it proposes is a new high priest: Jesus. Jesus becomes the high priest for all of humanity. Through his death, Jesus passes into the heavens, into the heavenly temple. And there, carrying his own blood with him, he goes into the inner sanctum of the heavenly temple, the Holy of Holies, the throne room of God, and offers his own blood, a perfect sacrifice, for the sins of the entire world. There might not be a temple on earth in which to offer sacrifices, but there is still a perfect temple in heaven. And there may not be a high priest in Jerusalem to offer that sacrifice, but there is a perfect high priest, Jesus Christ, who can enter into the heavenly sanctuary to offer a sacrifice, once and for all, for the forgiveness of the world.

Now, Jesus wasn’t a priest in his earthly life. He wasn’t even born of a priestly family. But Hebrews insists that he is a priest; he is a priest according to the order of Melchizedek. Melchizedek is only mentioned twice in the Hebrew Bible. Back in Genesis, he is mentioned briefly in the Abram story. Melchizedek isn’t even an Israelite. He’s one of the Canaanites in the land. Specifically, he is the King of Salem, that is, Jerusalem, centuries before Jerusalem ever becomes an Israelite city. In addition to being king of the city, he is also a priest of the God of Salem, El Elyon, which translated means God Most High. So just to reiterate, Melchizedek is an ancient king and priest, he’s from Jerusalem, but from long before Jerusalem was a Jewish city, and it’s not even clear that he worships the same god that Abraham worships; he worships a god named El Elyon, God-Most-High.

After Abram has won a battle against several rival kings, this Melchizedek shows up and blesses Abram in the name of El Elyon. In response, Abram gives Melchizedek one-tenth of the booty that he has won in the battle, as an offering to El Elyon. Abram tithes his loot. And it is Melchizedek, the King and Priest of Salem, who offers that tithe to God on Abram’s behalf. Before Aaron, before Levi, before any Israelite priest, there is Melchizedek.

Melchizedek is mentioned one more time, in Psalm 110. The psalmist, who is presumably talking about the Messiah, records God saying, “You are a priest forever, according the order of Melchizedek.”

By the time Hebrews was written, Melchizedek had become a kind of mythical figure. Traditions had grown up around him, saying that he had no beginning and no end—that is to say, he had no parents and he did not die. And this is the figure with whom Hebrews identifies Jesus: Melchizedek, the King and Priest of Salem, one who has no beginning and no end, one who is a great high priest. King, priest, immortal.

Hebrews goes on to say that Jesus is even superior to the high priests of the old temple. After all, it argues, the high priests in the Jerusalem temple had to offer sacrifices for their own sins before they could offer sacrifices for the sins of the people. But Jesus was sinless. He didn’t need to atone for his own sins. This made him the perfect high priest, according to the order of Melchizedek, who alone could enter the perfect temple, and who alone could offer the perfect sacrifice, his own blood, for the forgiveness of the sins of the entire world.

This solves the theological problem of the loss of the temple. God’s people need no longer be afraid that sins are piling up with no means of atoning for them. The earthly temple has been destroyed by Rome, but the heavenly temple still stands tall, and Jesus has entered it to make the perfect sacrifice of atonement.

But it also spoke to another problem: the problem of Rome. Remember that Hebrews says that Jesus is like Melchizedek, the immortal and divine King and Priest of Salem. Well, there was someone else who could fit that description: the Roman Emperor. King was not his official title, but he was treated like a king. He was an autocrat. What’s more, he was a priest. He held the title pontifex maximus: high priest. And he was an immortal god. Like many other emperors before them, both Emperor Vespasian and Emperor Titus were deified after their death, and worshipped as gods. The emperor was even king and priest of Salem. Salem, salam, shalom—it means peace. After Vespasian conquered Jerusalem, he built a new Temple of Peace in Rome, and that’s where he put all of the treasures that he had stolen from the Jerusalem temple. He took the tithes they paid for the temple in Jerusalem and used them to build a pagan temple in Rome. He tried to obliterate every last reminder of God and God’s people and replace them with himself. Caesar would be their king. Caesar would be their high priest. The temples that they would use would be Caesar’s temples. Even the god they would worship would be Caesar. King, priest, temple, god: all of these were Caesar…

And Hebrews says, “No!” Despite all evidence to the contrary, our God lives. Despite all evidence to the contrary, we have a temple in heaven. Despite all evidence to the contrary, we have a great high priest who has made a perfect sacrifice for our sins. God has taken the ruins the Romans left in Jerusalem and transformed them into a perfect and eternal temple. God has taken a cross—a Roman instrument of execution—and transformed it into an alter. God has taken an executed criminal and transformed him into a perfect high priest who offers the perfect sacrifice of himself for all the world. This world does not belong to Caesar, it belongs to God. We do not belong to Caesar, we belong to God. Caesar is not our savior, our savior is the Lord Jesus Christ. Give to Caesar what belongs to Caesar, but remember that all things belong to God.

On the front of the bulletin, you can see an icon depicting Jesus as he is described here in the Book of Hebrews. Like Melchizedek, he is both priest and king. On the top of the image are Jesus’s initials: I-S, X-S, which stand for Jesus Christ.  To the left of his head, it says, ὁ Βασιλεύς τῶν Βασιλευόντων: which means, The King of Kings. On the right are the words, καί μέγας ἀρχιερεύς: which means, and the Great High Priest. He is dressed in the vestments of an Eastern Orthodox priest and wears the crown of a Byzantine emperor.