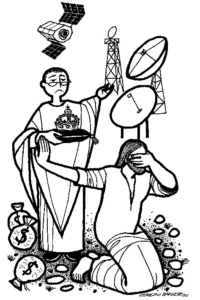 Jesus, after his baptism, is led by the Holy Spirit into the wilderness. He spends forty days and forty nights out there in the desert. It’s reminiscent of the forty days that Noah and his family spent on the ark, and of the forty years that the Hebrew people spent in the wilderness. During the whole forty days, Jesus doesn’t eat anything. At the end of the time, we are told, he was starving. And while the devil has been testing him the whole forty days, at the end of that time he appears with a series of tests for Jesus.

There are three tests. First, the devil encourages Jesus to use his power to transform a stone into bread, so that he won’t have to be hungry. Then, the devil offers Jesus control over all the nations of the world if he will simply acknowledge the devil’s authority. And finally, the devil suggests that Jesus prove his status as the Son of God by throwing himself from the pinnacle of the temple so that the angels will appear to save him and his identity will be revealed.

Now, I’ve often thought that Jesus was weakened by his time in the wilderness, that his energy was sapped by his lack of food and lack of companionship. And that’s the way this text is usually taught and preached.  Jesus was at his weakest, and so the temptation that the devil delivers is especially effective. That means it is a sign of Jesus’s exceptional fortitude that he is able to withstand the devil’s wiles.

But it occurs to me that perhaps we’ve gotten that backward. Maybe all the fasting, all the time out in the wilderness, maybe it doesn’t make Jesus weaker. Maybe it makes him stronger.

Let’s take a look at that first test. After forty days, Jesus is starving. The devil appears and says, “If you are the Son of God, command this stone to become a loaf of bread.” If fasting makes Jesus weak, then the devil is trying to exploit this weakness in order to easily tempt him. But if fasting actually makes Jesus stronger, then the devil is trying to eliminate his strength, to break him down so that he’ll be more vulnerable later.

Jesus answers the devil, saying, “It is written, ‘One does not live by bread alone.’” It’s a quotation from the 8th chapter of Deuteronomy. And the context here is important. Moses is warning the Hebrew people about the importance of following the commandments that they have been given, even after they have entered the promised land and become a mighty nation. This is while the Hebrews are still in the wilderness, but they are about to enter the land of Israel. The text says:

Remember the long road on which the Lord your God led you during these forty years in the desert so he could humble you, testing you to find out what was in your heart: whether you would keep his commandments or not. He humbled you by making you hungry and then feeding you the manna that neither you nor your ancestors had ever experienced, so he could teach you that people don’t live on bread alone. No, they live based on whatever the Lord says. (Deut 8:2-3)

The text Jesus quotes comes directly from the time when the Hebrews were in the wilderness, being tested, enduring hunger. It seems clear that there is a connection between these two stories. There is a connection between the Hebrews being humbled by hunger and Jesus being humbled by hunger. And what is more, by looking at the larger context of the story in Deuteronomy, we can gain even more insight into Jesus’s situation.

Moses warns the people not to grow slack in their faith once they have an easier life in Israel:

But watch yourself! Don’t forget the Lord your God by not keeping his commands or his case laws or his regulations that I am commanding you right now. When you eat, get full, build nice houses, and settle down, and when your herds and your flocks are growing large, your silver and gold are multiplying, and everything you have is thriving, don’t become arrogant, forgetting the Lord your God:
the one who rescued you from Egypt, from the house of slavery;
the one who led you through this vast and terrifying desert of poisonous snakes and scorpions, of cracked ground with no water;
the one who made water flow for you out of a hard rock;
the one who fed you manna in the wilderness, which your ancestors had never experienced, in order to humble and test you, but in order to do good to you in the end.
Don’t think to yourself, My own strength and abilities have produced all this prosperity for me. Remember the Lord your God! He’s the one who gives you the strength to be prosperous in order to establish the covenant he made with your ancestors—and that’s how things stand right now.(Deut 8:11-18)

It seems clear from this text that while their time spent in the desert was hard, it was actually good for them. It was easier for the people to recognize the power of God when they had to rely on it each day for their very survival. But Moses is afraid that once the people get settled, once they get a taste of security and even of luxury, then they will no longer recognize their need for God. They will forget that everything in this world is a gift from God. They will begin to think that they have earned their wealth and prosperity through their own power, and they will forget about the God who delivered them from slavery in Egypt and led them through the wilderness.

So in a way, the wilderness, the hardship of being refugees, of having to rely on God for everything, has made the faith of the Hebrews stronger. And since Jesus quotes from this story, we may assume that the same is true for Jesus. His hunger allows him to stay closer to God. It is not through power, but through humility that Jesus stays connected to God. Fasting allows him to remember that he is dependent upon God. It helps him to keep from trying to usurp God by forgetting his place in God’s plan and showing off his own power.

And as Moses warns, this comparative luxury puts us in danger of forgetting the importance of God in our lives. When times are good, it’s easy for us to forget our need for God. We start to trust in our own abilities, to rely on ourselves. We start to think that we don’t really need God, that we can do just fine on our own.

And that is precisely why we have the season of Lent. It is a chance for us to do precisely what Jesus did, to spend time in fasting and prayer. It’s not an exercise in spiritual machismo, as we often assume. It’s not about proving how much we can give up or sacrificing things just so that we can endure suffering. Fasting during Lent is a spiritual discipline designed to help us get closer to God, to give up some physical strength in order to gain spiritual strength, to give up our own willing so that we might be open to the will of God.

I go back and forth on whether or not it is a good idea to compare Lent with a physical fitness plan. I think sometimes that analogy can lead us astray. Because Lenten discipline is often connected with our diet, sometimes we end up focusing on gaining physical benefits instead of spiritual ones. Giving up dessert becomes more bout losing 10 pounds in 46 days than about anything spiritual.

But I think in general, the analogy is an apt one. Lent is like a spiritual fitness program. Taking on a Lenten discipline is a way of improving our spiritual health, of strengthening our spiritual muscles. It should help us to be in closer relationship with God and our neighbors. It’s a reminder that we do not need all of our stuff in order to be happy and fulfilled. In fact, sometimes that stuff gets in the way of our happiness. Lent is an opportunity to strip away the distractions and focus on what is important.

Lent shouldn’t be depressing. It’s not supposed to be about beating ourselves up or about denying ourselves any happiness. I know that’s often the direction that we tend to take it, but I don’t think that’s right. Lent is about stripping away what is unimportant so that we focus on what is important. And what is important is quite simple: love God, love people. That’s it. That’s what Lent should be driving us toward: loving God and loving people.

And so, I invite you to the observance of Lenten discipline, with these traditional words:

Dear brothers and sisters in Christ:
the early Christians observed with great devotion
the days of our Lord’s passion and resurrection,
and it became the custom of the Church that before the Easter celebration
there should be a forty-day season of spiritual preparation.
During this season converts to the faith were prepared for Holy Baptism.
It was also a time when persons who had committed serious sins
and had separated themselves from the community of faith
were reconciled by penitence and forgiveness,
and restored to participation in the life of the Church.
In this way the whole congregation was reminded
of the mercy and forgiveness proclaimed in the gospel of Jesus Christ
and the need we all have to renew our faith.
I invite you, therefore, in the name of the Church,
to observe a holy Lent:
by self-examination and repentance;
by prayer, fasting, and self-denial;
and by reading and meditating on God’s Holy Word.
That your faith might be strengthened
and your connection to God confirmed.