↓
Home Menu ↓
Skip to primary content
Skip to secondary content
Home - The Latest - Sermon: To Perceive with the Church 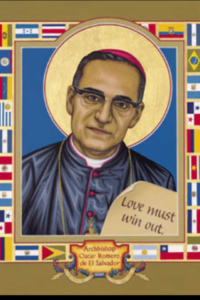 We have just two people left in our Summer of Saints sermon series. This week we have our most contemporary saint: Archbishop Oscar Cardinal Romero y Galdámez. As it happens, he has just been selected this year to be made a saint in the Roman Catholic Church. There will be a ceremony at the Vatican on October 14th to make it official.

Oscar was born on the 15th of August, 1917 in Ciudad Barrios, El Salvador. His family was wealthier than many of their neighbors, but their small house still didn’t have electricity or running water. The children slept on the floor.

Oscar studied at school and then with a private tutor until he was was twelve. His family couldn’t afford it any more education, so he went to work as a carpenter’s apprentice. By all accounts, he showed great promise as a carpenter, but he felt a calling to become a priest. At thirteen, he entered the minor seminary in San Miguel. A minor seminary is a kind of boarding school, common in societies with low literacy, to give a basic education to teenage boys aspiring to become priests. When his mother became ill after giving birth to her eighth child, Oscar had to return home to work, this time in a gold mine. A fourteen year old working in a gold mine.

He went on to study at the national seminary in San Salvador before being sent to the Gregorian University in Rome to complete his studies. He graduated cum laude in 1941, but he was still too young to be ordained a priest. He was finally ordained in Rome in April of 1942, in the midst of the Second World War. His family was unable to attend because of the conflict. He continued to study in Italy, working on a doctorate in Theology. In particular, he studied ascetic theology, spiritual practice that focus on simplicity, the denial of earthly desires to allow one to focus more fully on God.

Before he could finish his doctorate, Oscar was recalled home to El Salvador. However, along the way, he and a colleague were detained in Cuba and held in a series of internment camps.

After they were released, Oscar took up his position as priest in the rural parish of San Miguel. He stayed there as a pastor for twenty years. He was highly active as a priest. He started an AA group in his parish, worked on the construction of a cathedral in San Miguel, and was appointed as rector of the seminary in San Salvador. He convinced not one, but five local radio stations to broadcast his Sunday sermons to peasant farmers who believed they were unwelcome in church.

In January 1966, Oscar took a retreat. He was exhausted from twenty years of ministry. The priests who examined him diagnosed him with scrupulosity. The psychiatrist called it obsessive-compulsive personality disorder. By whatever definition, Oscar was consumed with perfectionism, always thinking he could do things better, always thinking he could be in better control, always seeking to do God’s work more perfectly.

Rather than send him back to the parish, the church gave him a more bureaucratic role as Secretary of the Bishops Conference for El Salvador. He become publisher of regional church newspaper. It became noticeably more conservative under his watch.

Four years later, in 1970, he was made a bishop, auxiliary bishop for the Archdiocese of San Salvador. This means that while he was a bishop, he kind of an assistant to the real bishop of the area, Archbishop Luis Chávez.

After four years, they sent him out to be bishop on his own in the poor and rural Diocese of Santiago de María. During his two years as bishop there ‘he was horrified to find that children were dying because their parents could not pay for simple medicines. He began using the resources of the church and his own personal resources to help the poor, but he knew that simple charity was not enough. He wrote in his diary that people who are poor should not just receive handouts from the Church or the government, but participate in changing their lives for the future.

In 1977, Oscar Romero was made Archbishop of San Salvador. It was a time of upheaval in El Salvador. Much of Latin America was trying to establish an identity apart from the Western colonial powers. And Latin American was often a proxy battlefield between the United States and the USSR. It was the Cold War, and the interests of local people were secondary to the worldwide struggle between Capitalism and Communism.

Out of this conflict, one religious response was Liberation Theology. Focusing on the biblical books like Exodus, the Gospel of Luke, and the Epistle of James, liberation theologians like Gustavo Gutiérrez and Leonardo Boff argued that God has a special concern for the plight of the poor, that God stands against the oppression of the marginalized, that God cares for the most lowly. They called it God’s preferential option for the poor. They argued that in the face of extreme poverty and exploitation of ordinary people, God called the church to do something, to strive for a more just society. They said that Christians were called not just to orthodoxy—right belief—but also to orthopraxy—right action. Christians were called to work for a more just society.

However, liberation theology was not well-received by all. In the face of Cold War tensions, liberation theology was widely criticized for being Marxist. It was also disliked by much of the Catholic hierarchy, because it understood them to be a part of the upper class that at best was blind to the concerns of the poor and at worst participated in taking advantage of the poor.

Around the time of Romero’s appointment as archbishop, many Catholics in El Salvador were running afoul of the Salvadoran government. Because of their work with the poor, they were seen as rebels, agitators, who were trying to subvert the government. A priest, Mario Bernal, who was working among the poor, was snatched by government forces and deported, though they blamed it on rebel guerrillas. This was the context into which Archbishop Oscar Romero came.

Oscar Romero was not a liberationist. He was a conservative. Progressives were afraid that he would stand in the way of their work with the poor, that he would side with the repressive government over them.

When he came into office, one of his friends, a Jesuit priest named Rutilio Grande, was working with communities of poor people, organizing them into self-reliance groups. He preached a sermon in response to the deportation of Father Mario. In it, he said this:

“I am fully aware that very soon the Bible and the Gospels will not be allowed to cross the border. All that will reach us will be the covers, since all the pages are subversive – against sin, it is said. So that if Jesus crosses the border at Chalatenango, they will not allow him to enter. They would accuse him, the man-God … of being an agitator, of being a Jewish foreigner, who confuses the people with exotic and foreign ideas, anti-democratic ideas, and, that is, against the minorities. Ideas against God, because this is a clan of Cain’s. Brothers, they would undoubtedly crucify him again. And they have said so.”

Less than a month into Archbishop Romero’s tenure, his friend, Fr. Rutilio, was assassinated by government forces. While traveling to the town where he was born to celebrate a religious festival, he was gunned down in a coordinated attack which also killed the elderly man who was driving him and a sixteen-year-old boy who was traveling along.

Conditions in El Salvador were getting worse. The military was killing many, including teachers, priests, and nuns who spoke out against injustice. Thousands of people began to go missing. Archbishop Romero said later, “When I looked at Rutilio lying there dead I thought, ‘If they have killed him for doing what he did, then I too have to walk the same path.’” Romero demanded that the President investigate. He did not. The press printed not a word about it.

Romero began to speak out. He used the weekly broadcasts of his Sunday sermons to name those who were being tortured, killed, and disappeared. He denounced the regime of dictator Gen. Carlos Humberto Romero, and he also refused to support the right-wing military junta that replaced him. He lobbied in Rome and around the world for the welfare of his people. He begged the US military to stop giving arms to the Salvadoran government death squads. They continued.

His pleas were met with mixed reaction. Some recommended him for the Nobel Peace Prize. Others denounced him as a Marxist radical. He started to receive death threats.

‘On March 23, 1980, after reporting the previous week’s deaths and disappearances, Archbishop Romero began to speak directly to the soldiers and policemen: “I beg you, I implore you, I order you… in the name of God, stop the repression!” The following evening,’ while he was leading worship in the chapel of a church-run hospital, he spoke the words “Those who surrender to the service of the poor through love of Christ will live like the grain of wheat that dies… The harvest comes because of the grain that dies.” He finished his sermon and walked to the altar to begin celebrating holy communion. A red car stopped abruptly outside the chapel. A man got out, stepped up to the door of the chapel, fired a gunshot through Romero’s heart, then got back in the car and sped away.

Oscar Romero died a martyr’s death. He died the death of a radical. Though he was a reelected radical, if he could be called a radical at all. He was deeply wary of religious movements that focussed on worldly change at the expense of inward conversion. He said,

“Let us be today’s Christians. Let us not take fright at the boldness of today’s church. With Christ’s light, let us illuminate even the most hideous caverns of the human person: torture, jail, plunder, want, chronic illness. The oppressed must be saved, not with a revolutionary salvation, in mere human fashion, but with the holy revolution of the Son of Man, who dies on the cross to cleanse God’s image, which is soiled in today’s humanity, a humanity so enslaved, so selfish, so sinful.”

He was not a natural activist. He was much more comfortable in prayer than in protest. And yet, when faced with such obvious injustice, he could not remain silent. He became a voice for the voiceless, an advocate for the powerless, a defender of the oppressed. He lived in solidarity with the poor and with those who suffered violence. He walked the way of the cross.

After his death, he was not immediately named a saint. The Vatican was deeply skeptical. Too cozy with those Marxist liberation theologians, they said.

We are called by many labels, but there is one before all others: made in the image of God. May God perfect that image in our life together. Amen.