Sunday 12 February 2017
The Sixth Sunday after the Epiphany 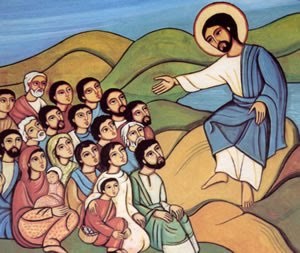 For a third week, now, we have been reading from the section of Matthew known as the Sermon on the Mount. It is one of the best known and best loved pieces of scripture in the entire bible. Many consider it to be the very heart of the gospel message, the canon within the canon, the text by which all other texts are judged. The text that begins, “Beloved are the poor in spirit,” is itself a text much beloved.

Though many of us have been taught that Jesus came to free us from the law, to set aside the outdated rules of the Old Testament, the Jesus of the Sermon on the Mount declares quite the opposite. In Matthew 5:17, he says, “Don’t even begin to think that I have come to do away with the Law and the Prophets. I haven’t come to do away with them but to fulfill them. I say to you very seriously that as long as heaven and earth exist, neither the smallest letter nor even the smallest stroke of a pen will be erased from the Law until everything there becomes a reality. Therefore, whoever ignores one of the least of these commands and teaches others to do the same will be called the lowest in the kingdom of heaven.”

In the section of the Sermon on the Mount that we read today, Jesus proceeds to go through several of the Old Testament laws and comment on them. “You have heard that it was said,” he begins, and then quotes one of the old laws. And then he follows up with, “But I say to you,” and he gives a new law. If we think that Jesus preaches a new existence free from the old law, then we might expect Jesus to take the old law and soften it up a bit. We might expect Jesus to do away with some of the more archaic aspects of the law.

And perhaps we are not meant to. After all, none of the apostles cut off his own hand that day on the mountain. None of the disciples plucked out her own eye. So what are we supposed to get out of this very strange sermon?

I think some of it has to do with the way we judge others and the way we have a tendency to think of ourselves as somehow qualitatively better than others. After all, we are Christians, aren’t we? We are blessed by God. We do our best to follow God’s laws. Surely that counts for something. Surely that makes us better than the unwashed masses who never have a care for anything that is good or right or just or Godly.

But surely I am better than an adulterer, aren’t I? I have kept my marriage vows. And yet Jesus says that anyone who looks on another with a lustful eye is liable to the same punishment as the adulterer. And, as Jimmy Carter so truthfully pointed out, there is not one of us who has not committed adultery in our heart many times. Jesus confronts our self-righteousness and declares that not one of us has grounds to claim that we are better than an adulterer.

He seems to be saying something similar about divorce. If I get a divorce because I have found someone I think I love more, and if I refrain from physical union until after the divorce is final, that technicality does not excuse me from adultery. That’s the overall message of this section: we can’t think that we have avoided judgment simply because we have found some loophole in the law. We can’t think that we are better than the people around us simply because we have committed less visible sins than they.

Despite any outward appearances to the contrary, we are all sinners. We all carry around our enduring guilts, our secret shames. That is something that every human being has in common. We have all fallen short of the glory of God.

What Jesus’s words do is to hold together two contrary notions at the same time. Jesus’s words challenge us to do better, to strive for lives of perfect holiness. But at exactly the same time, Jesus’s words remind us that whatever level of holiness we may live, it cannot be the ground for boasting. Jesus calls us simultaneously to perfect obedience and to perfect humility, neither letting our obedience puff us up until we lose humility nor letting our humility break us down until we see no point in striving for obedience.

Actually, it’s a lot more complicated than that. If I strive for holiness, there are several different traps I might fall into. I might be so proud of my holiness that I think I am better than other people. I might hold myself to such an impossibly high standard that I constantly feel incapable and unworthy. I might fixate on a few kinds of holiness so that I miss many other important things I should be doing. I might use the standard of holiness only as a means of judging and condemning other people, while never holding the same standard up to myself. I might be so concerned with doing what is right that I forget about God’s grace, grace for me and for my neighbor. I might put so much pressure on myself and my own abilities to do what is right that I forget that true holiness comes not from working hard, but from allowing God to work in me. Those are ways that striving for Godliness can end up running off the rails.

And humility is just as tricky. If I am striving for humility, I might end up just not trying, just doing nothing because nothing matters. I might end up constantly beating myself down, trying to make myself lower and lower, so that I don’t reach humility, instead I reach humiliation, self-loathing, and crippling depression. I might end up achieving a fair level of humility, until I come across someone who is boastful, and I end up thinking, I am so much more humble than he is. I might hold myself to such a strict standard of humility that I can’t honestly assess my own strengths, and I don’t ever end up using my talents for God. I might put so much pressure on myself to be humble that I forget about God’s grace, grace both for me and for my neighbor. I might put so much responsibility on myself to be humble that I forget that true humility comes not from working hard, but from allowing God to work in me.

But it doesn’t end there. It doesn’t end with me recognizing that I am a sinner and asking for God’s grace. The strictness of the rules remind us that there is still a goal. And once I have accepted God’s justifying grace, God’s forgiveness, then I can begin to be open to God’s sanctifying grace, the Spirit’s continuing work in my life to make me holy. I can begin to let the Holy Spirit work within me, once I have accepted God’s grace. And God’s Spirit can help me to have grace with my neighbors, even though they too are sinners. God’s Spirit can help me to have grace with myself, even though I am a sinner. God’s Spirit can begin to work in my life, so that my actions move closer to the mark, so that I more fully embody the life that God wants me to lead, the self that God wants me to be. But I am not making myself acceptable to God. No, God’s grace makes me acceptable, and God’s grace molds me into fuller realization of that perfect goal. I work with God, and I allow God to work in me, but I can never do it on my own in order to please God. God’s grace forgives me, and God’s grace moves me on toward greater holiness, greater humility.

It takes time. It takes active, patient endurance. It takes acceptance of myself and who I am. Not perfect, but a beloved child a God. A child in need of grace. A child of a God who has plenty of grace to share.